Forests, soils and oceans are the unsung heroes of our climate, storing the greenhouse gases that cause global heating. But they could perform even better with a little help.

Around half of emissions released remain in the atmosphere. Nature absorbs the rest, holding it in carbon sinks, such as soil, oceans and vegetation. These natural storage solutions slow climate change far more effectively than any human technology — carbon storage factories store just 40 megatons of CO2 annually or 0.003% of anthropogenic emissions.

Natural carbon sinks could perform even better with a little tweaking and for a comparatively small price tag. But humans are destroying more and more natural CO2 sinks, damaging our most successful tool to halt a climate catastrophe. 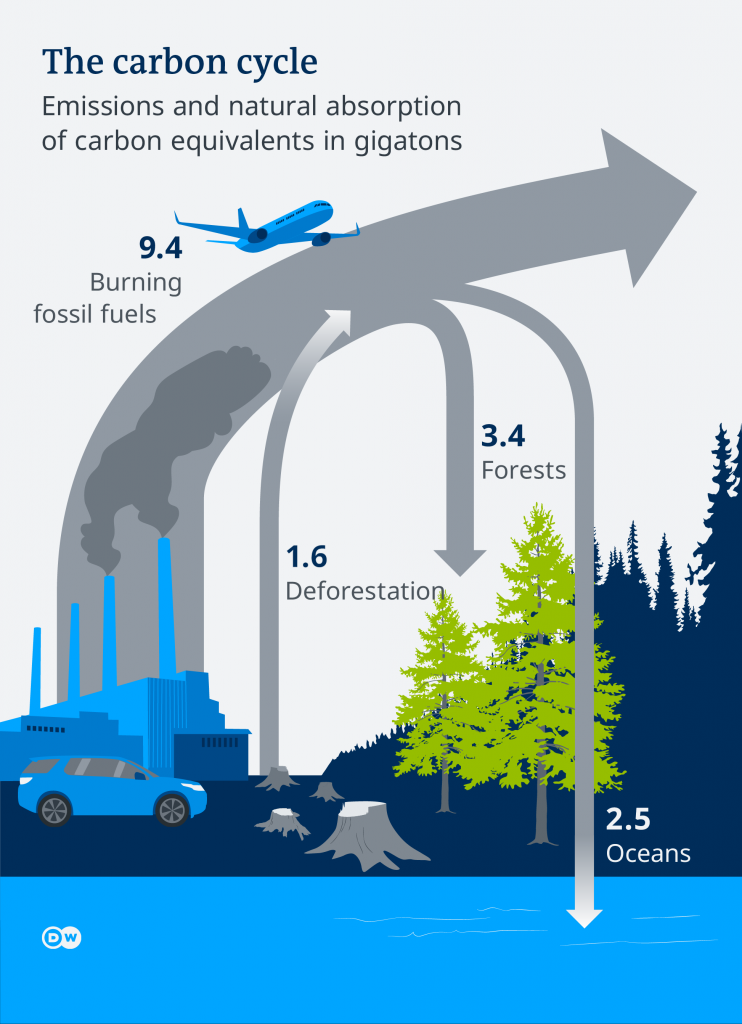 Nature struggling to keep up

As humans rapidly increased their carbon emissions by burning fossil fuels, the amount of CO2 absorbed by plants, soils and oceans also increased. Plants actually benefit from an oversupply because high CO2 concentrations mean they must open their pores only briefly to absorb the gas. This way they lose less water and can better survive droughts.

However, scientists say plants and oceans will soon reach their absorption capacity. For instance, by 2050, ocean surfaces will be completely saturated with CO2.

Humanity is also now producing more carbon than nature can process, and so the amount of greenhouse gas in the atmosphere is rising rapidly. 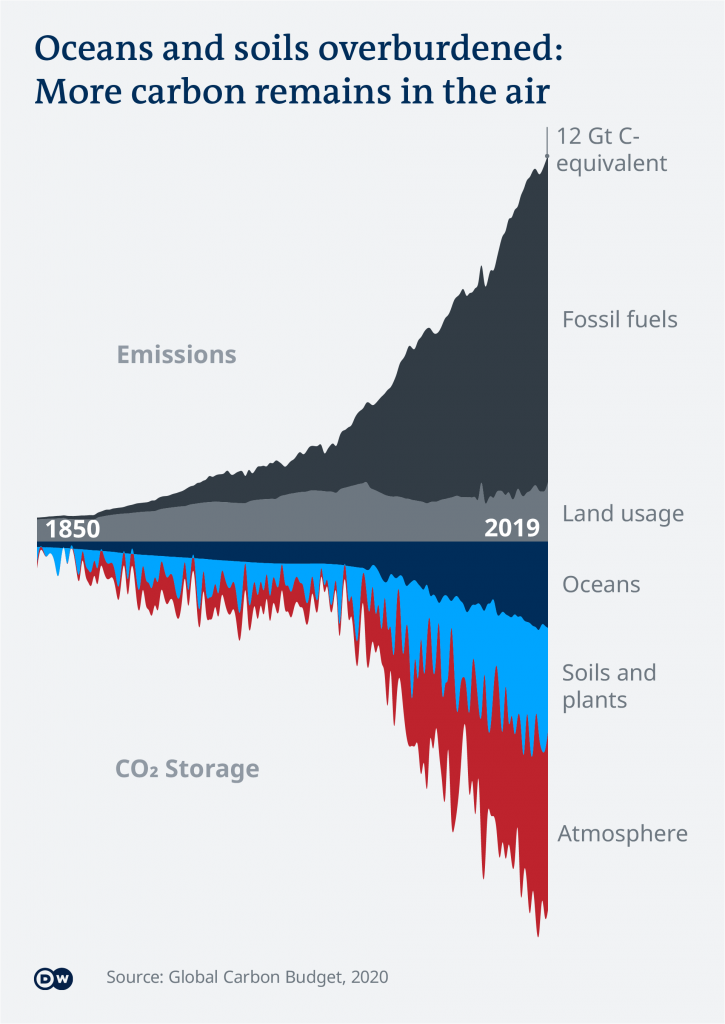 Vegetation sinks: Trees for the climate

The world’s forests absorb a total of 15.6 gigatons of CO2 per year. That’s three times the annual CO2 emissions of the United States. But around half of this leaks back into the atmosphere thanks to deforestation and forest fires. Worldwide, deforestation accounts for a fifth of all greenhouse gases ever produced by humans.

The Amazon rainforest, for example, is one of the world’s most valuable carbon sinks. But since Jair Bolsonaro became Brazilian president in 2019, more and more of this vital ecosystem is being lost.

Conversion of forest to agricultural land means the Amazon basin now emits as much carbon as the remaining forest can sequester. Soon it could become like the tropical forests of Southeast Asia, which for years have been emitting more CO2 than they absorb. 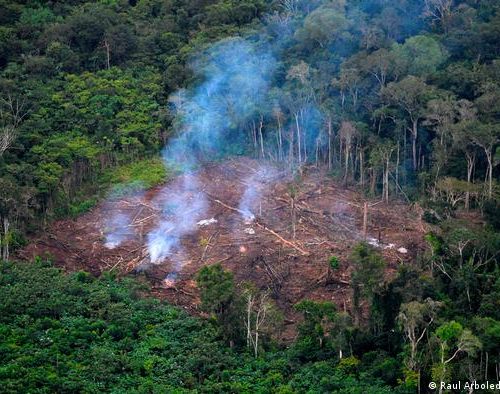 “You know, continuing stewardship and longevity of the program with tree planting — and [the involved] mortality rate — is very costly,” said Messinger, adding it would be cheaper to let forests grow naturally in open areas. 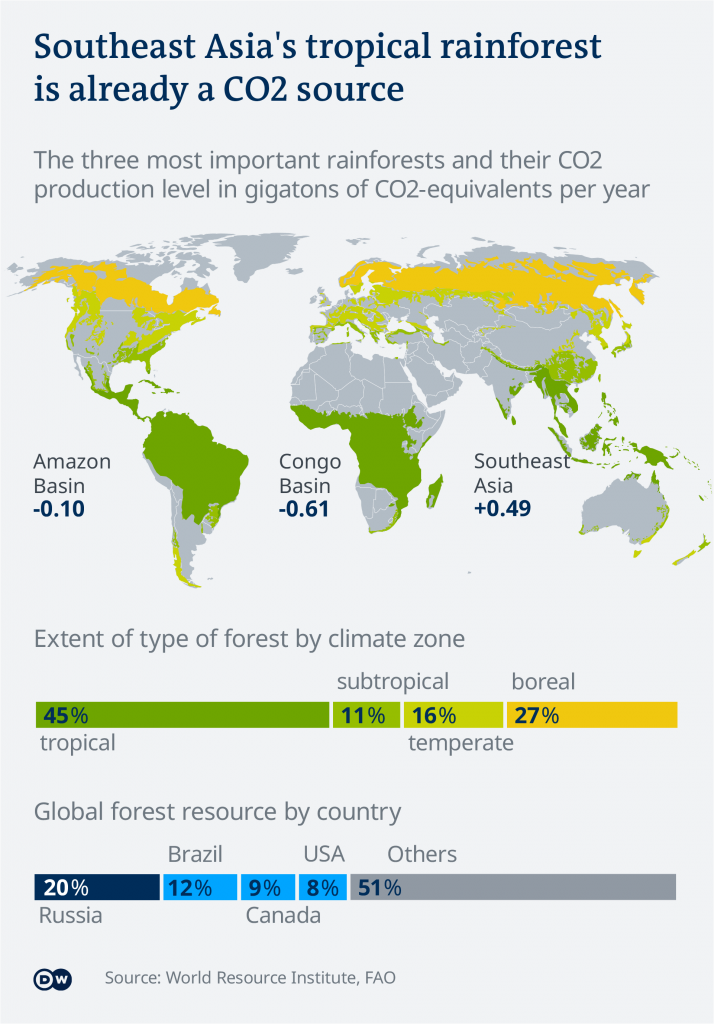 Young trees growing on deforested land could neutralize up to 23% of annual emissions, nearly halving atmospheric CO2 growth, according to the WRI. Saplings would be particularly effective in warm, humid areas of West and Central Africa.

Forests require considerable land, however, to be effective carbon sinks — and with a growing demand for food, they will have to compete with agriculture for that land. If newly planted forests were to be cleared, any stored CO2 would be released, negating the positive effects.

Soil does not absorb CO2 as quickly, but it outperforms vegetation in the amount it stores. About half the soil in Central Europe, for example, is made up of carbon.

Globally soil contains almost twice as much CO2 as living flora and the atmosphere combined. How well it stores carbon, however, depends on soil type, vegetation and climate. In general, the wetter and colder, the better. Soils under northern boreal forests and temperate grasslands hold particularly large amounts. 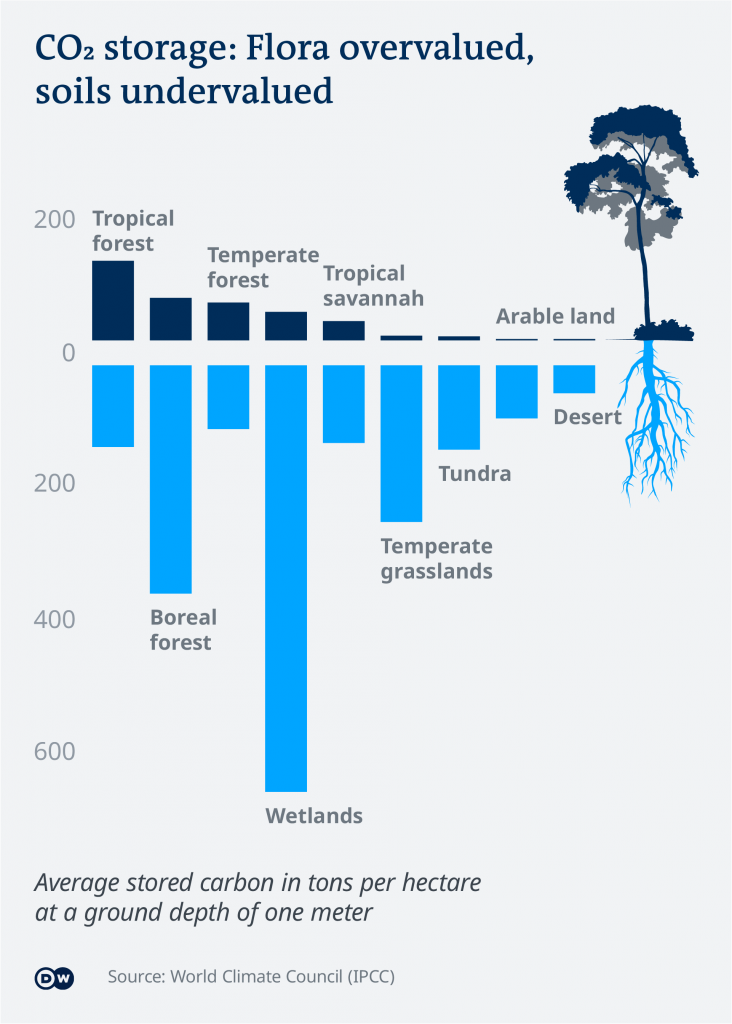 Peatlands and marshes are the carbon sink champions. The world’s peatlands account for about a third of the total CO2 absorbed by soil, although they make up just 3% of the world’s land area.

In these wetlands, plant debris sinks into shallow, slightly acidic water. The debris doesn’t decompose in this oxygen-poor environment and instead turns into carbon-storing peat.

Draining peatlands exposes the layers underneath to oxygen, triggering a decomposition process that releases CO2. Oxidation also produces nitrous oxide, which is about 300 times more harmful to the climate than carbon. 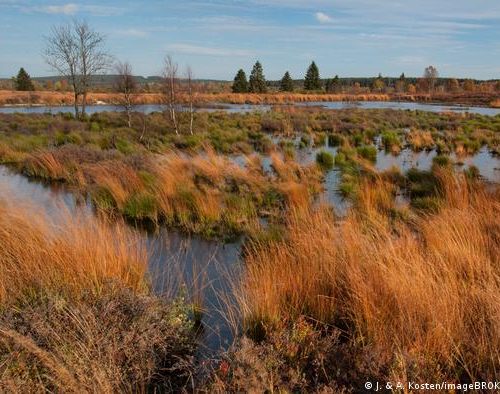 Despite their tremendous abilities, peatlands and wetlands are under pressure around the world. In Indonesia, peat forests are giving way to palm oil plantations and are being destroyed by forest fires, generating huge emissions. Meanwhile, Germany has drained almost all its former peatlands. Just 0.02% remains of the original 5% land area.

Dust to combat the climate crisis?

Dust, or more precisely basalt dust, could improve soil’s carbon storage abilities. When scattered on fields it reacts with CO2 dissolved in soil water, according to researchers writing in peer-reviewed journal, Nature Geoscience. The particles are then washed into lakes and oceans before being deposited as sediment.

The process also occurs naturally. But it occurs more quickly with finely ground basalt because of its large surface area. Basalt also secretes minerals that boost plant growth in nutrient-poor soils, which in turn would store more CO2. 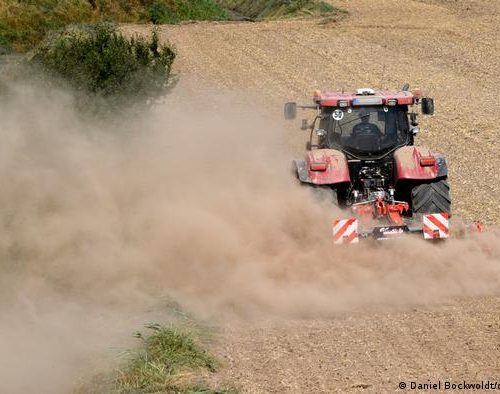 Spreading basalt once across a piece of arable land the size of Asia would store 2.5 gigatons of CO2 per year. That’s equivalent to India’s annual emissions. Other researchers estimate the climate gain could be double that. Basalt is also relatively easy to come by even without new mines, as it’s a byproduct of cement and steel production.

Still, vegetation and soils cannot match the enormous potential of the oceans. Seas store up to 80% of the world’s carbon. Theoretically, they could absorb 95% of human-made greenhouse gases but this would take too long. 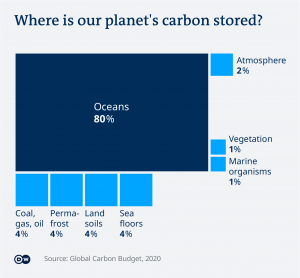 Trees store carbon on an annual cycle. In contrast, it takes centuries for CO2 particles to sink from the surface and to be stored in the deep sea. At the same time, carbon concentration at the surface lowers absorption of new emissions.

But it’s not just the water that can store CO2: Marine plants such as algae and seagrass are on the case too. Seaweed alone removes 0.173 gigatons of carbon from the atmosphere each year before it dies and sinks to the ocean floor, researchers estimated in Nature Geoscience.

This is why companies like Pull to Refresh are experimenting with giant kelp farms at sea that would sequester CO2.

What about the price tag?

Whether trees, moors or oceans, nature is helping humans to mitigate climate damage. Basalt fertilizer, new forests on land or seaweed could boost the carbon-sucking potential of natural sinks. 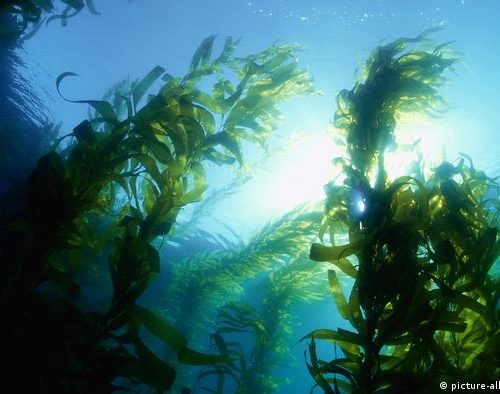 Technical solutions that filter CO2 directly from the air are even more expensive, ranging from $134 to $342 per ton, according to the International Energy Agency.

It’s cheaper not to burn carbon in the first place and avoid emissions through insulation, green energy and conservation.

“Cutting emissions is the most important thing that we can do. And so I think that’s always number one,” said Jared Messinger of the World Resources Institute.

Translated from German by Elliot Douglas